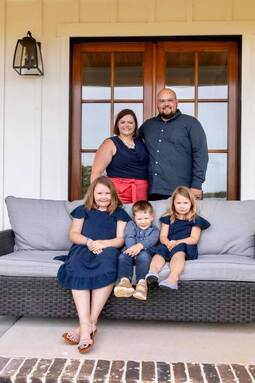 Pastor Josh Leathers was saved at the age of four and was a founding member of Lighthouse Independent Baptist Church when it was started in 1995.

Upon graduating from Bible College in 2009 with a Bachelor of Science in Pastoral Assistant Studies, he began work at Lighthouse where he served as Associate Pastor. On September 23, 2012, Pastor Leathers was unanimously voted in as Pastor when his father, Steven Leathers, the founding pastor, felt the Lord moving him to resign.  Along with his wife Melodie, Pastor Leathers is faithfully carrying forward the mission of Lighthouse Independent Baptist Church to point others to Christ.

In 2009, Pastor Leathers and Melodie were married, and they have since had three children.

In addition to his responsibilities at Lighthouse, Pastor Leathers serves as a Vice-Principal at Victory Baptist Academy in Shelbyville, TN.

Pastor and Melodie enjoy spending time with their children. They also enjoy traveling, and fellow-shipping with the Lighthouse family. Pastor also enjoys a good cup of coffee, working out, and almost anything technological.